Five Questions with Marissa Presley: Speaking Out Against Abuse 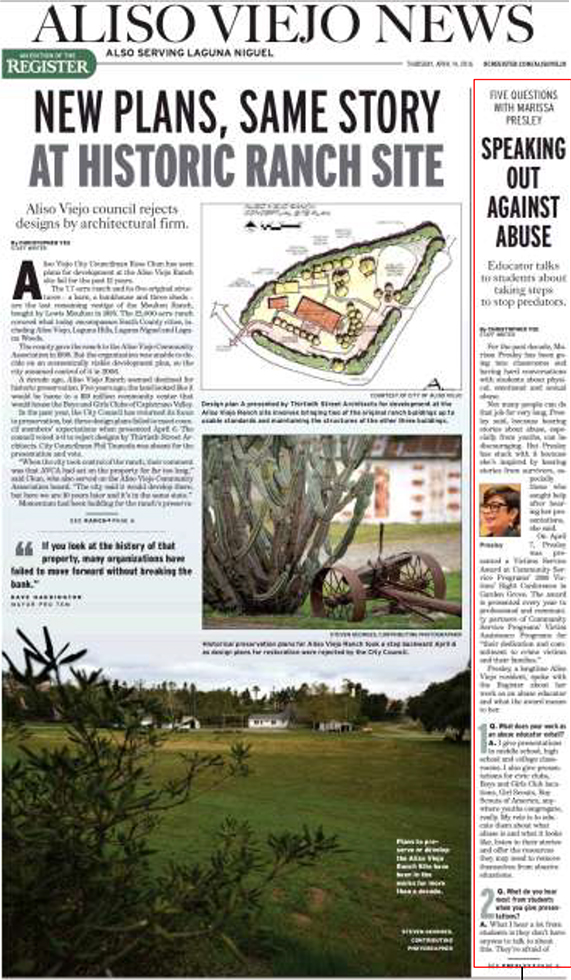 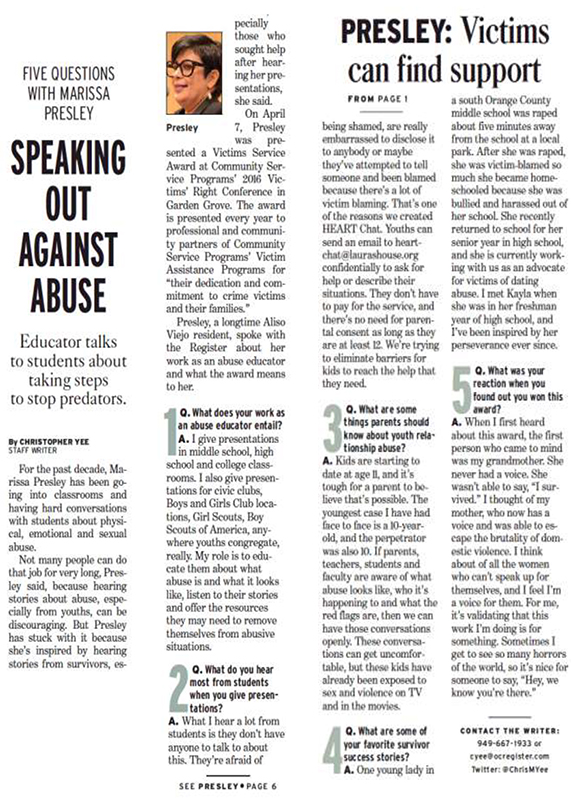 For the past decade, Marissa Presley has been going into classrooms and having hard conversations with students about physical, emotional and sexual abuse.

Not many people can do that job for very long, Presley said, because hearing stories about abuse, especially from youths, can be discouraging. But Presley has stuck with it because she’s inspired by hearing stories from survivors, especially those who sought help after hearing her presentations, she said.

Presley, a longtime Aliso Viejo resident, spoke with the Register about her work as an abuse educator and what the award means to her.

1 Q. What does your work as an abuse educator entail?

A. I give presentations in middle school, high school and college classrooms. I also give presentations for civic clubs, Boys and Girls Club locations, Girl Scouts, Boy Scouts of America, anywhere youths congregate, really. My role is to educate them about what abuse is and what it looks like, listen to their stories and offer the resources they may need to remove themselves from abusive situations.

2 Q. What do you hear most from students when you give presentations?

A. What I hear a lot from students is they don’t have anyone to talk to about this. They’re afraid of being shamed, are really embarrassed to disclose it to anybody or maybe they’ve attempted to tell someone and been blamed because there’s a lot of victim blaming. That’s one of the reasons we created HEART Chat. Youths can send an email to heartchat@laurashouse.org confidentially to ask for help or describe their situations. They don’t have to pay for the service, and there’s no need for parental consent as long as they are at least 12. We’re trying to eliminate barriers for kids to reach the help that they need.

3 Q. What are some things parents should know about youth relationship abuse?

A. Kids are starting to date at age 11, and it’s tough for a parent to believe that’s possible. The youngest case I have had face to face is a 10-year-old, and the perpetrator was also 10. If parents, teachers, students and faculty are aware of what abuse looks like, who it’s happening to and what the red flags are, then we can have those conversations openly. These conversations can get uncomfortable, but these kids have already been exposed to sex and violence on TV and in the movies.

4 Q. What are some of your favorite survivor success stories?

A. One young lady in a south Orange County middle school was raped about five minutes away from the school at a local park. After she was raped, she was victim-blamed so much she became home- schooled because she was bullied and harassed out of her school. She recently returned to school for her senior year in high school, and she is currently working with us as an advocate for victims of dating abuse. I met Kayla when she was in her freshman year of high school, and I’ve been inspired by her perseverance ever since.

5 Q. What was your reaction when you found out you won this award?

A. When I first heard about this award, the first person who came to mind was my grandmother. She never had a voice. She wasn’t able to say, “I survived.” I thought of my mother, who now has a voice and was able to escape the brutality of domestic violence. I think about of all the women who can’t speak up for themselves, and I feel I’m a voice for them. For me, it’s validating that this work I’m doing is for something. Sometimes I get to see so many horrors of the world, so it’s nice for someone to say, “Hey, we know you’re there.”

Read the full article on OCRegister.com

Home for the Holidays? Or Shelter, Crisis and Fear? Featuring Adam Dodge We’ve all heard there is more domestic violence during the holidays, but is that really true? Is there more assault, more victimization, more seeking shelter because of this time of year? How does this season affect victims, survivors and their families?

TILLY’S LIFE CENTER AND LAURA’S HOUSE SELLS OUT THEIR FIRST ANNUAL FESTIVAL OF THE HEARTS EVENT More than 300 teens interacted and learned about creating healthy and positive relationships during the inaugural event ...

Tell your friend that you are concerned or think they might be in an abusive relationship. Send them an anonymous e-postcard for free!

Take action and stand up against adolescent dating abuse by simply taking the Laura's House pledge to promote healthy relationships.

Red Flags and warning signs are present in the beginning of a relationship, even on the first date. Identify them, recognize them and act.

Changing social beliefs, attitudes and the behaviors that perpetuate domestic violence while creating a safe space in which to empower individuals and families affected by abuse.